Cary Yan and Gina Zhou, two Marshallese citizens of Chinese descent, were charged on September 2, 2022 for money laundering and violating the Foreign Corrupt Practices Act. The two defendants have pled not guilty to the charges.

The Justice Department’s indictment accuses them of using money from China and other unnamed sources in an attempt to bribe six Marshall Islands government officials to back efforts in establishing a special investment zone on Rongelap Atoll.  The project was first publicly announced in Hong Kong in April 2018.

The indictment of Cary Yan (aka Hong Hui Yan or Chen Hong) and Gina Zhou (aka Chaoting Zhou or Angel Zhou) raises more questions than it answers.  On its face the indictment reads as one limited to the Marshall Islands.  Yet, in looking into the NGO operated by the defendants, things become more complicated. 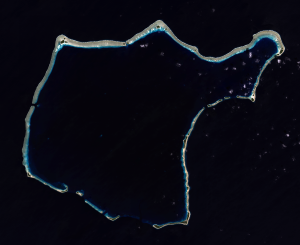 The NGO, World Organization for Governance and Competitiveness (WOGC), was launched by its Chairman, Cary Yan, in 2016 at the opening of the 71st session of the United Nations General Assembly.  A gala was held celebrating the launch of WOGC.  Bangladesh prime minister, Sheikh Hasina, was the keynote speaker. Vice-Minister of Foreign Affairs for Guatemala, Anamaria Dieguez Arevalo also spoke at the launch, applauding WOGC’s plans for work in Trifinio region of El Salvador, Guatemala and Honduras.  Plan Trifinio’s El Salvador Executive Director, Sergio Bran, received a WOGC Award for work on sustainable development in the Trifinio region.

The gala also featured violinist Miri Ben-Ari, whose bio describes her as a Grammy winning “UN Goodwill Ambassador of Music”.  The publicist for WOGC was Amy Britt, a New York city public relations and marketing consultant whose client list is heavily weighted with Fortune 500 clients.

WOGC’s impressive launch signaled this was no ordinary NGO.

In April 2018 Cary Yun led a WOGC delegation to meet with Marshall Island officials in Hong Kong.  China Daily quoted Kessai Note, former president of the Republic of the Marshall Islands, saying “Based on ‘one country, two systems’, Hong Kong has achieved miracles as it pursues its globalization strategies.”  WOGC joined the Preparatory Committee of Rongelap Atoll Digital Special Administrative Region of the Republic of the Marshall Islands to discuss strategies for “…digitization that can slash business costs, and integrate global supply-chains and industry commodity supply,” China Daily reported.  The April meeting was part of a larger meeting that continued to feature Latin American voices as well.  A young British academic was hired as a translator for speeches that covered, “Special Administrative Regions, Digital Economy, Economic Development, International Cooperation and Tourism.”

Still, questions abound.  Who funded WOGC?  The gala that launched the NGO was certainly a stellar, if not expensive, event.

Thinking about both Yan and Zhou, what visa did they use to conduct work in the US? Related to that, when did Yan and Zhou obtain their Marshallese citizenship?  Did Marshallese officials screen and/or do background checks?

What was their goal in accessing the Pacific?  In time, more will be revealed.