Title: Compacts of Free Association Countries: Diaspora in the US

For 3 decades, citizens of Federated States of Micronesia, the Republic of the Marshall Islands, and Palau have been able to live and work in the U.S. indefinitely without a visa through special agreements called Compacts of Free Association (CFA). The number of people who migrate to the U.S. under the auspices of these compacts has grown by about 70% in the last decade, particularly on the continental US.

States and territories have reported rising costs of public education and health care for these migrants. Though these populations generally are not eligible for federal programs such as Medicaid, some states have found ways to use federal funding to help cover their health insurance premiums.

The US Government Accountability Office (GAO) was tasked by the US Congress to gain a greater insight into the lives of migrants from the CFA countries. The GAO visited Arkansas, the CNMI, Guam, Hawaii, Oregon, and Washington to better understand how CFA migrants fared.

On July 1 at three panelists from GAO joined us to discuss their study, Compacts of Free Association: Populations in U.S. Areas Have Grown, with Varying Reported Effects.

David Gootnick has served as a Director, International Affairs and Trade at the U.S. Government Accountability Office since September 2001.  His portfolio includes issues affecting the Commonwealth of the Northern Marina Islands, American Samoa, and the Freely Associated States (FAS).  From 1994-2001 he served as Director of the Office of Medical Services at the Peace Corps and as Director of the University Health Services at New York University from 1991-1994.  Dr. Gootnick holds an M.D. from the University of Rochester and a bachelor’s degree from Harvard University.

Emil Friberg is an Assistant Director and Senior Economist, International Affairs and Trade team at the U.S. Government Accountability Office. His responsibilities include reviews of the implementation of Compacts of Free Association with the Federated States of Micronesia, the Republic of the Marshall Islands, and Palau, including the role of U.S. economic assistance, the viability of trust funds to support FAS government operations, and compact migration. Dr. Friberg holds a Ph.D. from the University of North Carolina and a bachelor’s degree from the University of Texas. He is an Adjunct Professor in the CANZPS program at Georgetown University.

Caitlin Mitchell is a Senior Analyst, International Affairs and Trade team at the U.S. Government Accountability Office and leads performance audits of federal programs in the areas of national security and foreign policy. Her work focuses on the intersection of international affairs and domestic policy, on topics such as compact migration, Confucius Institutes on U.S. campuses, financial contributions to UN peacekeeping operations, and U.S. efforts to counter ISIS messaging. Prior to GAO, she worked at the Department of Defense, and studied at the University of Pittsburgh (MPIA) and Dickinson College (BA, Russian). 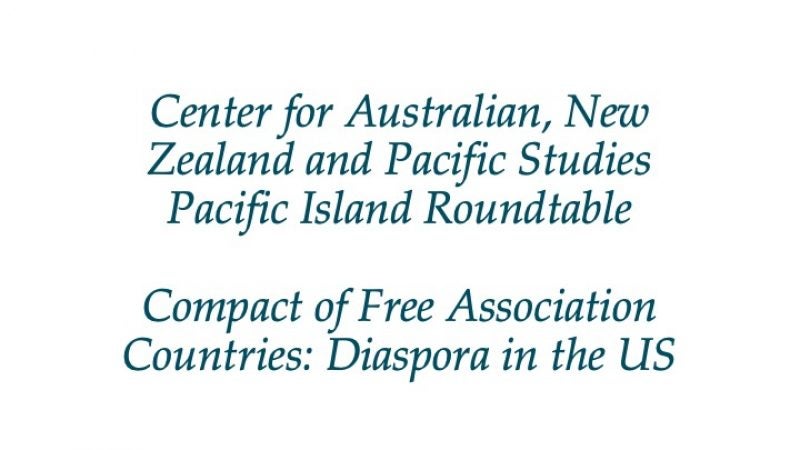